View into the gallery at night.

The Platonic Ideal.
Acrylic on canvas with crystals. 38 cm x 38 cm.
Seven triangle shaped canvases with sets of ' PLATONIC IDEAL´  crystals 8meant to embody universal perfection and to balance one's KARMA- which have been inserted into holes burnt into each.  The crystals reflected rainbows into the space. 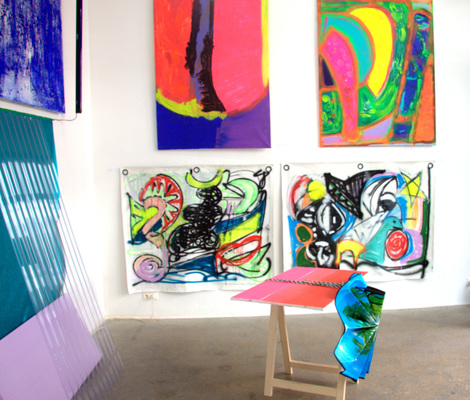 Installation View of the Exhibition. 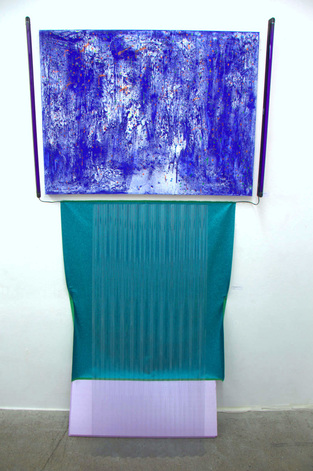 Deep Green Grotto. A Painting Installation: Painting: Pigment, neon paint on canvas, black lights.
Glitter Material. Styrofoam. and Plastic Sheet. 2015. A mixed media installation that uses the temporary/ephemeral materials of third world shanty towns to speak to the exotification of third world/vacation destination countries such as my birth land, Trinidad and Tobago.  The work is a critique of the valourization of the sublime and the sublimation of what is often abject poverty. 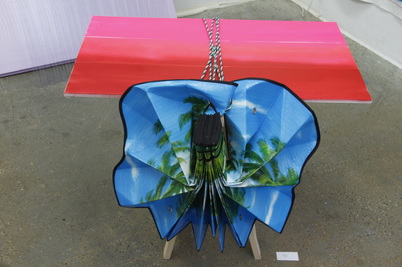 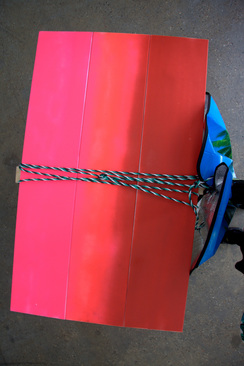 Neon Tobago Palms: The Heat Is On.  A Painted/Sculptural Installation. Windshield protector, Painting: spraypaint on canvas, twine and saw horse. 2018.
A piece that uses German windshield protectors that are printed with idealized island palm photos to comment on the glorification of warm tourist destinations.

BAHAUS BREAKDOWN:
Mixed media Assemblage on metal sculptural hanger, Digitally Printed Fabric (using a drawing by the artist) and wooden construction. 2015.
A piece that contrasts the quick haphazard yet pragmatic construction of my third home country, Canada in its northern camps with the highly structured, philosophized and theoretisized design of the influential German art and design movement of the Bauhaus. 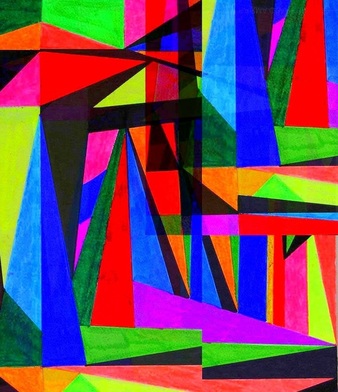 Bahaus breakdown drawing that was printed onto the material.

Kehrwoche | A Sauber Zauberer Höffnung Mixed media sculptural installation: Digitally printed with a gradient printed artist designed fabric using the colours of the German flag at the bottom, with broom.  2015. A piece that plays on the German concept/pre-occupation with cleanliness.
In Southern Germany all occupants of apartment buildings are put on a schedule
to be responsible for the cleaning of the communal areas of the building.  I created this piece as a play on the idea of the symbolic hope of the rainbow contrasted with the stringent rule regulated societal expectations of my adopted home, Germany. 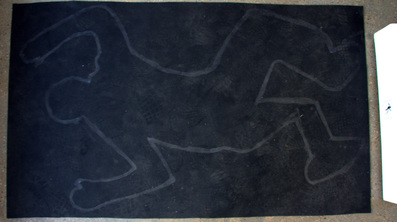 DER SCHWARTZER MANN. Black rubber mat with white chalk outline abd footprints.   200 cm x 100 cm. 2015. A piece that is named after a German (and many other European Countries) folktale of the "Black Man," who comes in the night to steal naughty misbehaving children away.  I wanted to comment on the intrinsic and entrenched racism that exists in Germany while also paying hommage to the multitude of young black me who were and continue to be unfairly gunned down in the US.  The piece was placed at the bottom of the stairs leading up to the second level of the gallery so that every visitor who went upstairs had to tread on top of the black man and be implicated in /question their involvement in allowing this racism/lack of justice to continue. 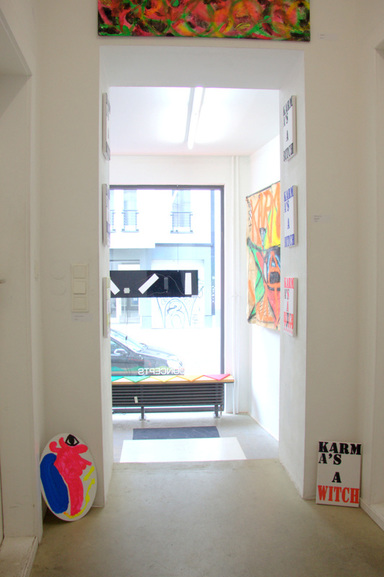 KARMA'S A BITCH/WITCH.  Digital print on canvas.  A series of works that play on my given name and it's co-option by Western Pop Culture.  This conceptual work questions the use of the term "Bitch" in contemporary society to demean women like myself, who are strong, opinionated and outspoken comparing to the demonization of women historically as witches. 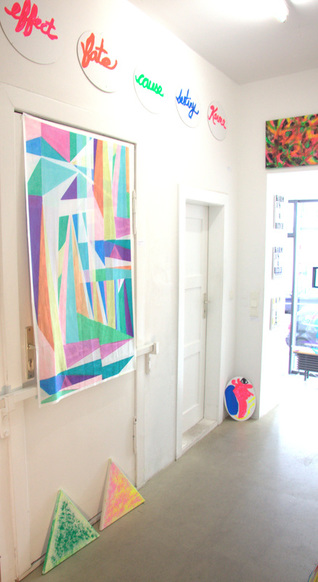 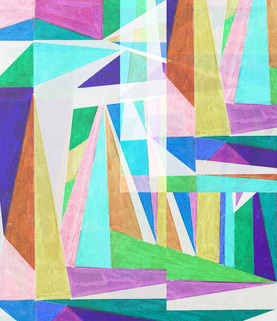 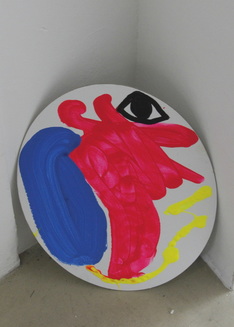 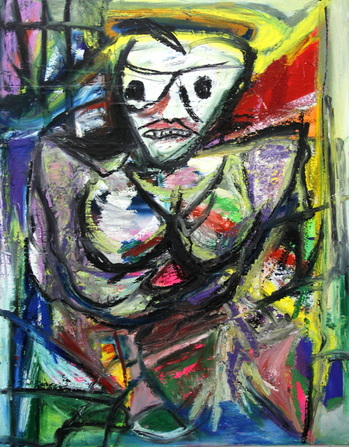 Ich Als Frau/Self-Portrait. Acrylic, oil and oil stick on canvas: 80 cm x 100 cm. 2014.
A painting that uses the style of the contested "de Kooning Women" series to question the fairness  and possible misogony of a man depicting women as vicious and angry shrews.  I  has reappropriated the aesthetic of one of these works to show myself as an "angry (brown) woman, a sterotype that I choose to both glorify and embrace. 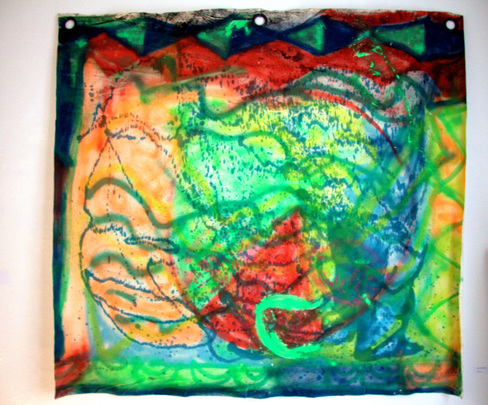 Alien Worlds. Ink, acrylic and spray paint on unstretched canvas.  An abstract painting that shows a map of a possible other world.

GOOD KARMA | BAD KARMA: A mixed media installation. A black print of a " Terroist" on plexiglass and a white on Digibond aluminum. Leather Ottoman, megaphone and leather whip.  2015.
This work questions our notions of food and evil.  I wanted to speak to the inherent human need to scapegoat not only individuals but entire races.
In most reccent times, Western culture used the Communists to instill fear in its citizenship.  In countemporary times it is the Muslims.  I also produced an accompanying video using these images combined with the wailing of the Muezzin that I recorded in Marrakesh, Morrocco. 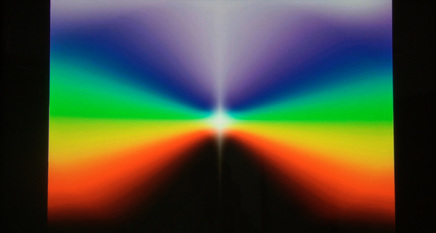 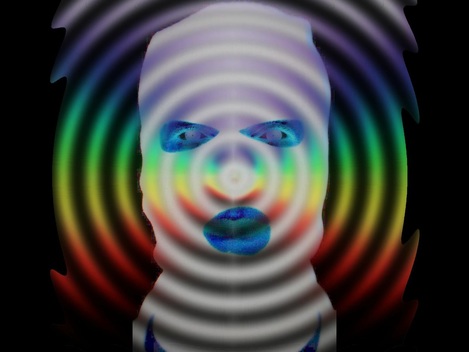 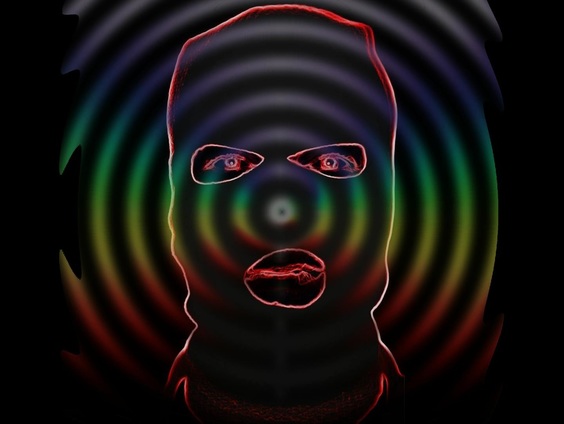 GOOD KARMA | BAD KARMA | Video stills. 2015. A poetic video that uses an artist produced "Terroist" image that parodies the media saturated terroist images of the last decade juxtaposed with a trendy rainbow grandient that parodies techno dance videos, with spirals to symbolize the spiralling out of control of this cultural sterotype.  The soundtrack was a multi-layering of a Muezzin. 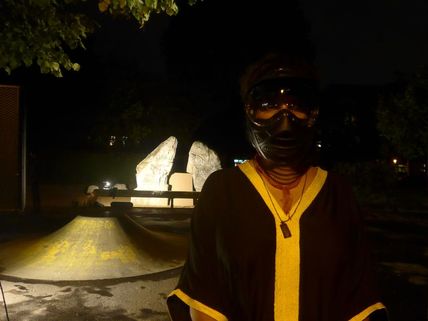 THE FALL | BORDERS | BOUNDARIES | WALLS: A Dadaistic Performance about the breaking down of differences between countries, cultures and people. This took place in the skate park on the corner of one of the first major art streets in Berlin after reunification, the fall of the wall. 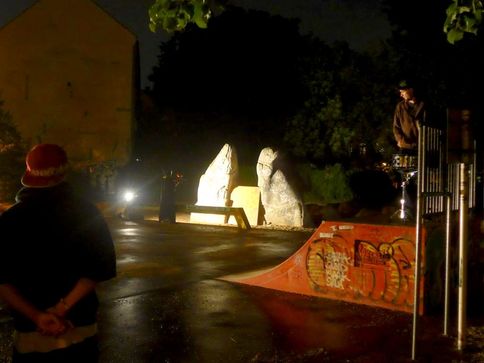 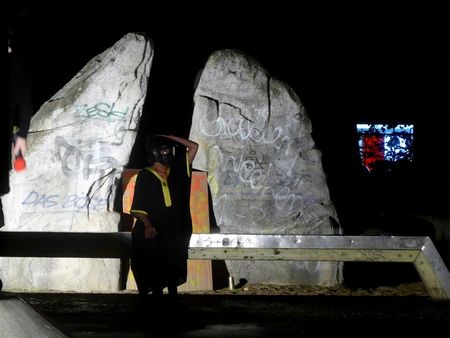 Performance Shots. The artist in the local skate park wearing a protective helmet after having used a paint gun to shoot at a board that had the words: BORDERS, BOUNDARIES, WALLS on it.

BORDERS. BOUNDARIES. WALLS. : Wooden Plaque Shot during the performance by the artist with paintball bullets.
karmakunst